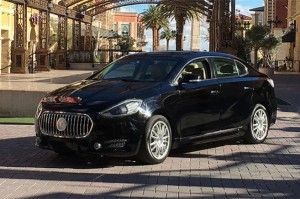 The public had its first look at 2050 Motors’ two car models Friday and Saturday nights at the news media and special invited guests catered receptions. The two models, the compact e-Go and luxury sedan Ibis, are still on display and the Company is inviting the public to see the cars.

The Las Vegas Review-Journal carried a major 1000 word article describing the advanced automobiles and the event. Reporter Richard N. Velotta in the article stated, “A second electric car company is planning to build a manufacturing plant in Southern Nevada, and it’s further along in development than Faraday Future — it has two car models it is showing off in Las Vegas this week.”

Mr. Velotta continued, “The 2050 Motors vehicles are the first electric vehicles manufactured with carbon fiber materials. That makes them lighter and stronger than conventional vehicles, giving them added range. Company officials say their cars will have a range of more than 200 miles on a charge.

“Joe LaStella, 2050’s senior engineering consultant, said the company has worked to keep itself under the radar until it completed five milestones: designing a car with carbon fiber, building a production plant, developing a supply chain, creating a distribution network for sales and passing U.S. Department of Transportation crash test standards.

“LaStella said the company has completed the first four milestones and felt it was close enough on the fifth to show off the car as a celebration of the Chinese New Year.

“ “Carbon fiber is five times stronger than steel at one-third of the weight, and that’s what makes this car different from anything else on the market,” LaStella said.”

“2050 [Motors] may seek state tax incentives, just as Faraday did. “2050 Motors has been negotiating for well over a year with municipalities to finalize plans for job creation. Both state governments and municipalities are offering considerable incentives for job creation,” the company said in a January press release.
“The company believes job creation is a key issue in the 2016 presidential election and recently added a section to its website calling attention to the prospect of adding 3,000 jobs.”

The entire Las Vegas Review-Journal article posted on February 13 is available at http://www.reviewjournal.com/business/second-electric-car-company-plans-manufacturing-plant-southern-nevada
Mr. Hu, whose picture is featured in the article alongside the e-Go commuter model vehicle, went on to say, “We all thought that the Ibis – the e-Go’s big brother which is a four door carbon fiber body luxury electric sedan – would be the feature of the show. However, the red e-Go stole the show and received even much more attention than the Ibis.

“Some of the most memorable comments from viewers include that the Ibis looked either like a Maserati or a Rolls Royce before they were told that it was a new carbon fiber electric automobile.
“The credit for the creation of these two future design carbon fiber automobiles and their advanced carbon fiber production technology must be given to Aoxin Automobile engineers and specially the coordinated effort by the Italian engineering firm BENSUR, and more particularly to Pasguale Bentivoglio (Paki) who holds many of the patents that are incorporated in both of the e-Go and Ibis luxury sedan.”

The showcasing event was a great success and was well attended. In fact, 2050 Motors decided to extend the showcase beyond February 22 until February 29 and considers extending the show even further. The display is open from 10 AM to 4 PM seven days a week at the world famous William Carr Gallery (http://williamcarrgallery.com/) located in the newly constructed Tivoli Village Mall, 400 S. Rampart Blvd., Ste. 105, Las Vegas NV 89145. People interested in viewing the vehicles on display and are planning to attend the gallery, we are cordially asking them to please register by emailing us at [email protected] with the subject “Attending Gallery” so that we may accommodate all of our visitors.

About 2050 Motors, Inc.
2050 Motors, Inc. ( http://www.2050motors.com and http://www.etfm.com), is a publicly traded company incorporated in Nevada in 2012. 2050 Motors was founded to develop and produce the next generation of clean, lightweight, efficient vehicles and its associated technologies. Some of these technologies include alternative renewable fuels, hybrid electric vehicles, advanced graphene lithium batteries and carbon fiber low cost vehicles. 2050 Motors has been successful in forming long term relationships and exclusive contracts for a variety of game changing technologies. 2050 Motors entered into an agreement with Jiangsu Aoxin New Energy Automobile Co., Ltd., located in Jiangsu, China, for the distribution in the United States of a new electric automobile, known as the e-Go EV (electric vehicle).

The e-Go EV is a revolutionary new concept in the ever evolving world of electric vehicles. It will be the only production line electric car with a carbon fiber body and parts manufactured by a new process using robotic machines which significantly reduces the fabrication time and cost of carbon fiber components. The e-Go EV will seat four passengers, have a long battery life, and high energy efficiency rating up to 150+ MPG-E energy equivalent in urban driving due to the light weight of the vehicle. The five passenger carbon fiber luxury sedan Ibis EV, the e-Go’s big brother, will also be showcased along with the e-Go EV for future sales in the United States. See videos of completion of the e-Go EV manufacturing plant at https://www.youtube.com/watch?v=wih8_xxZNgA and the unveiling of the e-Go EV at the 2014 Shanghai Auto Show http://www.2050motors.com/shanghaishow.html . The company is fully reporting under the SEC EDGAR system.

Disclosure Statement
Statements in this press release about our future expectations, including without limitation, the likelihood that 2050 Motors will be able to leverage capital markets to execute its growth strategy, meet US DOT requirements, meet minimum sales expectations, will be successful and profitable in the US market, and will bring significant value to 2050 Motors’ stockholders, constitute “forward-looking statements” within the meaning of Section 27A of the Securities Act of 1933, Section 21E of the Securities Exchange Act of 1934, and as that term is defined in the Private Litigation Reform Act of 1995. Such forward-looking statements involve risks and uncertainties and are subject to change at any time, and our actual results could differ materially from expected results. The Company undertakes no obligation to update or release any revisions to these forward-looking statements to reflect events or circumstances after the date of this statement or to reflect the occurrence of unanticipated events, except as required by law.