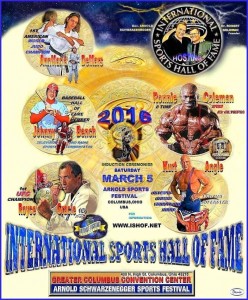 /UCW/ An overview from Guinness Book of World Records holder and one of the foremost authorities on health and sports medicine, Dr. Robert Goldman.

Action packed weekend for me coming up March 3-6 for the Arnold Schwarzenegger Sports Festival hosting over 200,000 attendees and over 20,000 athletes competing in over 70 sports.

Very involved for decades and sponsor the International Sports Hall of Fame (www.SportsHOF.org) event held annually, USA Arm Wrestling World Championship, After School All-Stars-Arnold’s charity event, & 1st Annual Arnold Statue Photo Contest. In the past also sponsored the Strongmen Highland Games, The Arnold Sports Film Festival, America’s Next Great Trainer (ANGT) competition, and donation of the 800 pound Arnold bronze statue donated to the City of Columbus. Working with my mentor and life long friend Arnold Schwarzenegger for decades, has been one of the greatest honors and pleasures. The world’s largest sports festival is a must see life event for everyone!!

“This is one of the greatest gatherings in total sports, The Arnold Sports Festival is one of the few events that you can run into a bodybuilding legend and turn around and run into a martial arts legend and turn around again running into a Hollywood superstar. The bonus is the International Sports Hall of Fame, Dr Robert Goldman has put together such an epic inductee list each year that you will not find such a gathering of elite athletes in one room. This is the top of the hill in true all around sports halls of fame.” Stated Louis Velazquez, host of the UCW Radio Show.