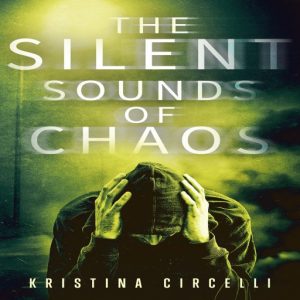 /UCW/ CHARLESTON, SC – On May 19th 2016, author Kristina Circelli will release her sixteenth novel, The Silent Sounds of Chaos on all major e-book platforms. The initial release price will be ninety nine cents.

This psychological thriller is set to leave readers begging for more as Circelli takes them on a gut wrenching journey following the friendship between Finn and Snow.

Heather Lyons, author of The Collectors’ Society series said “Dark, twisty, and mysterious, The Silent Sounds of Chaos kept me teetering on the edge of my seat while frantically tearing through the pages for answers, I was so ensnared within its web.”

About the book:
A silent call for help began the friendship between two children. A bond unlike any other kept them together.

Finn was just a kid when he first heard Snow’s voice inside his head, two children in need of a friend and finding one in mysterious strangers. Never meeting in person, the pair grows up as opposites – Finn the boy who loves to get in trouble and works for the toughest drug lord in town, Snow the good, sheltered girl who wants to be a doctor.

The bond built upon a strange ability to hear each other’s thoughts is threatened when Snow is abducted, her screams for help consuming Finn’s mind until they disappear completely, submerging him in a terrifying silence he’s never known before. Now it’s up to Finn to save her, led only by Snow’s sporadic thoughts as she floats in and out of consciousness.

But the search for Snow leads him to a truth he isn’t prepared to face, a truth that has the power to unravel his entire world. The people he thought he knew, the life he thought he’d made, the best friend he thought he could protect – all point toward a brutal reality should he fail.

And as Finn struggles to find Snow before she slips away, he must fight to keep that reality out, lest he let the chaos in.