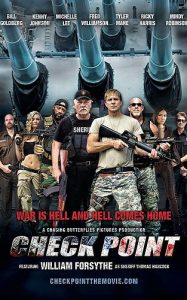 /UCW/ LOS ANGELES, CA – Bill Goldberg’s name has been synonymous with success and presence since his breakout run in professional wrestling including an impressive 173-0 record in WCW/WWE. Now besides being the new face for WWE’s 2K17, Goldberg is breaking new ground in his career as an unmistakable action star, most recently playing the part of T.J. Bauer in the completed film, Checkpoint.

Checkpoint, is a film which focuses on the rising extremist/terrorist attacks affecting the United States today, which are steadily rising in number and viciousness. Check Point tells the story of average Americans including, A homeless man, a cook, a teacher and a parcel post delivery man who are thrust into a realization that they can trust no-one when they are the only ones who are left to defend against a unbelievable enemy, a homegrown terrorist cell. If you are interested in interviewing Bill Goldberg for press, contact Sharry Flaherty with Samera Entertainment. [email protected]

Super excited to announce that Check Point will be released on Sept. 9th!!! Stay tuned for updates and more news about this exciting and incredible film! Please help me spread the word.. feel free to share this post with your friends and family.. we really appreciate your support! Check out the trailer and like the Check Point Facebook. CHASING BUTTERFLIES! https://youtu.be/GtsE7JsQwOY (Trailer) http://www.imdb.com/title/tt4519400/?ref_=fn_al_tt_1 (IMDb) https://www.facebook.com/CheckPointMovie/ (Facebook) #military #follow4follow #followforfollow #instadaily #instamood #wwe #movietrailer