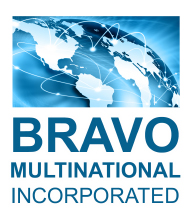 Paul Parliament, Bravo Multinational’s President, stated, “We are very pleased with this timely dismissal, allowing the company to now move on unencumbered with its business objectives and plans. The BRVO executives would like to thank its legal team in Delaware, lead by Mr. Chris Adamopoulos, as well as, the Company’s counsel, Mr. Norman Reynolds, for their diligence and commitment, resulting in the dismissal. Also, Bravo will be holding its annual shareholders’ meeting in the very near future, and will be announcing the date and location, shortly.”

BRVO continues to work forward on all aspects of its operational growth and will announce on its progress as information becomes available.

Bravo Multinational Incorporated cautions that the statements made in this press release and other forward looking statements made on behalf of the Company may be affected by such other factors including, but not limited to, vagaries of trade, market competition and other risks detailed herein and from time to time in the U.S. Securities and Exchange Commission filings of the Company.