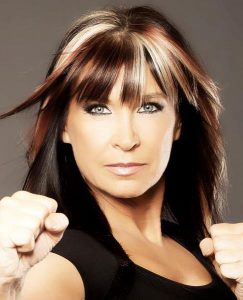 /UCW/ ATLANTIC CITY, NJ and BROOKLYN, NY – Action film star Cynthia Rothrock is set to attend the largest martial arts event of its kind in the world January 27-29, 2017 at the Tropicana Hotel and Casino in Atlantic City, NJ. The event is known as the gathering of the elite, as thousands of martial arts leaders descend on Atlantic City for the Action Martial Arts Hall of Honors and Mega Weekend.

Cynthia Rothrock is known as the Queen of Martial Arts films. From an early age, Rothrock gained appreciation for martial arts. At 13, she began taking lessons at the private gym of her parents’ best friends, and was soon after entered open karate competitions to showcase her unique abilities. At only 5’3″ tall, she holds five Black belts in various Far Eastern martial disciplines, including Northern Shaolin (classical Chinese), Eagle Claw (Chinese), and Tang Soo Do (Korean), Tae Kwon Do (Korean) and Wu Shu (contemporary Chinese).

Rothrock was also the undefeated World Karate Champion in both forms and weapons competitions from 1981 to 1985. And she is one of the very few individuals to be inducted into both the Black Belt Hall of Fame and Inside Kung-Fu Hall of Fame. Rothrock eventually caught the attention of Hong Kong-based Golden Harvest Productions, who cast Rothrock opposite kung-fu queen Michelle Yeoh in 1985’s box office hit Yes, Madam. Rothrock spent five years in Hong Kong, becoming one of the few Caucasian performers to achieve genuine stardom in seven films.

Attempting to broaden her appeal to action fans in the U.S., Golden Harvest backed China O’ Brien and China O’ Brien 2 in 1990. Rothrock’s more than 30 cinematic ventures included Guardian Angel, Honor & Glory, No Retreat,No Surrender 2 and Prince of the Sun. Rothrock also appeared as Bertha Jo in the 1997 TV movie The Dukes of Hazzard: Reunion. In addition to films, she was also an inspiration behind the video game character Sonya Blade, featured in the game Mortal Kombat as well as lent her voice on the animated series Eek the Cat.

Our Expo and Trade Show continually expand in many different directions, with over a 100 vendors spots. We have also expanded to include Martial Arts Business Conference with top of the line speakers.