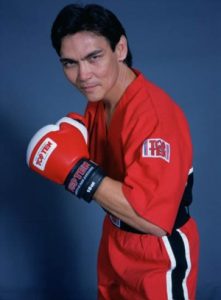 /UCW/ ATLANTIC CITY, NJ and BROOKLYN, NY – Kickboxing legend and action film star Don “The Dragon” Wilson is set to attend the largest martial arts event of its kind in the world January 27-29, 2017 at the Tropicana Hotel and Casino in Atlantic City, NJ. The event is know as the gathering of the elite, as thousands of martial arts leaders descend on Atlantic City for the Action Martial Arts Hall of Honors and Mega Weekend.

About Don “The Dragon” Wilson

Don “The Dragon” Wilson is unquestionably, the greatest kickboxing champion of all time, Don “The Dragon” Wilson is the only kick-boxer to win 11 world titles in 3 weight divisions (light-heavyweight, super-light-heavyweight, and cruiserweight) and for 6 sanctioning organizations (WKA, STAR, KCIK ,ISKA, PKD, AND IKF). Along the way, he defeated 11 other world champions, 12 number-one contenders and 15 champions on 4 continents.
For more on The Dragon go to https://www.donthedragonwilson.com/