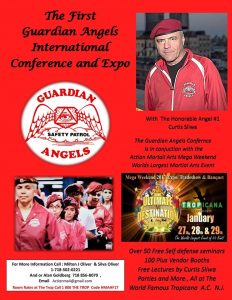 /UCW/ ATLANTIC CITY, NJ and BROOKLYN, NY – It was announced today that at the Tropicana Hotel and Casino in Atlantic City, NJ from January 27-29, 2017, the Guardian Angels in conjunction with the Action Martial Arts Mega Weekend will introduce its International Conference and Expo.

The honorable Guardian Angels founder, Curtis Sliwa, will be in attendance and giving a free lecture as the Guardian Angels members from around the world come together in what will be their annual conference and expo in Atlantic City, NJ.

“We are honored to be the host for the Guardian Angels International Conference and Expo, we make it a point to bring the best of the best to our attendees and this is a prime example of that. With over 50 free self defense seminars, over 100 vendor booths and various certification programs, there is something for everyone. The best thing is that you never know who will show up unannounced, we look forward to seeing everyone there”. Stated Action Martial Arts Mega Weekend founder Alan Goldberg.

About The Guardian Angels

The Guardian Angels have become integrated into the fabric of the community. Since 1979, the non-profit, New York City based group, has been responsible for creating hundreds of safety patrols chapters throughout the United States and worldwide. Formed by Curtis Sliwa and 12 dedicated volunteers in New York City, the “Magnificent 13” rode the subways to conduct safety patrol. For 37 years, thousands of people have joined the Guardian Angels and created chapters in over 130 cities in 13 countries to protect their communities and improve substantially the quality of life.

Guardian Angels are role models in the community and lead by example. They understand that problems of any community cannot be solved single-handedly and requires the cooperation of all its members. They recognize the need to foster community pride and civic mindedness to help remove many of the societal ills making safety patrol necessary. This attitude runs throughout the multitude of community programs and services volunteers administer. The Guardian Angels recognize that by thinking solely in terms of protection instead of prevention we are throwing up the white flag and surrendering to the inevitability of crime.
.
For more information go to http://guardianangels.org/

The #harlemdeer is dead. Visited @NYCACC & NO doubt deer was traumatized by the setting @BilldeBlasio should've left the deer alone! #NYC pic.twitter.com/iasT5dng2N