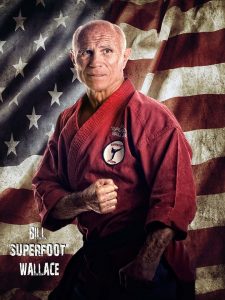 /UCW/ ATLANTIC CITY, NJ and BROOKLYN, NY – It was announced today that one of the true American Martial Arts legends, Bill “Superfoot” Wallace, will be in attendance at the 2017 Action Martial Arts Mega Weekend at the Tropicana Casino in Atlantic City, NJ. He will be part of the festivities, speaking with fans, conducting a rare free seminar, signing autographs and he will be along side other martial arts legends and leaders. This will be at the Tropicana Hotel and Casino in Atlantic City, NJ from January 27-29, 2017.

“I am honored that Bill Wallace has been a part of our family since the beginning, he is a true legend and fight master, so bringing fans this caliber of talent that they can interact and learn from is what we do at the Action Martial Arts Mega Weekend. We look forward to making additional announcements as we lead up to the once a year event in Atlantic City, NJ”, Stated Action Martial Arts Mega Weekend founder Alan Goldberg.

Bill “Superfoot” Wallace retired as the undefeated Professional Karate Association (PKA) Middleweight Champion after defeating Robert Biggs in a 12-round bout in June 1980. The victory, his 23rd straight, signaled an end to an illustrious fifteen year career in tournament and full contact fighting. Known to the karate world as Superfoot, symbolic of his awesome left leg, which was once clocked in excess of 60 mph, Superfoot left a string of battered and bruised bodies along the martial arts fighting trail. He used his foot as others would use their hands, faking opponents with two or three rapid kicks and following with one solid knockout technique. His power, speed and precision were astounding. Superfoot, a 5’10”, native of Portland, Indiana began studying karate in February 1967 after suffering a right leg injury in a judo accident. The injury left him without the use of his leg in karate competition. Some observers said that Superfoot was committing martial arts suicide. However, Wallace had other ideas. For the next several years, Superfoot dominated the point-tournament circuit.

As a national champion point fighter three years in a row, Superfoot captured virtually every major event on the tournament circuit. The more prestigious victories included: the U.S. Championships (three times), and the Top Ten Nationals (two times). Bill Wallace was such a dominant figure in the world of martial arts that Black Belt Magazine, the bible of industry publications, named him to its Hall of Fame three times in seven years—twice as “Competitor of the Year” and once as “Man of the Year”. Bill Wallace has additionally received numerous Hall of Fame honors from around the globe. Century Martial Arts has bestowed upon him a Lifetime Achievement Award along with taping a video series, simply entitled “Legends.” It has been noted that Superfoot is undeniably one of the ten most deadly men in the world.

In 1973, Superfoot, whose education includes a bachelor’s degree in physical education from Ball State University and a master’s degree (1976) in kinesiology from Memphis State University, suffered what many considered to be a career-ending injury. However, one of his friends, the late Elvis Presley, moved Superfoot into Graceland and called upon a renowned acupuncturist from Los Angeles to treat his friend. The result was simply amazing.

A year later, Bill Wallace, turned professional and captured the PKA middle weight karate championship with a second-round knockout (hook kick) of West German Bernd Grothe in Los Angeles. He relinquished the crown in 1980, undefeated and respected around the world.

Despite his retirement, Bill Wallace, continues to be one of the martial arts most popular figures. He is the author of three books: Karate: Basic Concepts & Skills, Dynamic Kicking and Stretching, and The Ultimate Kick. He additionally has a series of videos which continue to be very much in demand. All are considered staples for the serious martial artist.

A former member of the President’s Council on Physical Fitness, Bill Wallace, has also been active in the film industry. His credit’s include: A Force of One with Chuck Norris; Kill Point, with Cameron Mitchell; Continental Divide and Neighbors with John Belushi; The Protector with Jackie Chan; A Prayer for the Dying with Mickey Rourke; Ninja Turf; and A Sword of Heaven, among others. Mr. Wallace has close to twenty films under his “black belt” and continues to be involved in the entertainment industry.

Bill Wallace currently resides in South Florida where he lives with his wife and four dogs. He remains active in conducting seminars around the world, and has schools both in the United States and across the globe. He remains very much in demand for public appearances, seminars and films.

For more information go to http://superfoot.com/