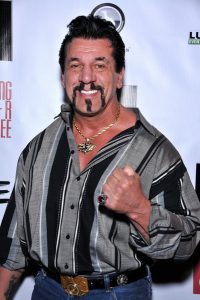 /UCW/ ATLANTIC CITY, NJ and BROOKLYN, NY – It was announced today that the original Italian Bad Boy Chuck Zito will be in attendance at the 2017 Action Martial Arts Mega Weekend at the Tropicana Casino in Atlantic City, NJ. He will be part of the overall event, participating in the festivities, speaking with fans, conducting a rare free seminar, signing autographed pictures, autographing copies of his book and he will be along side other martial arts legends and leaders. This will be at the Tropicana Hotel and Casino in Atlantic City, NJ from January 27-29, 2017.

“I am honored that my long time friend Chuck Zito will be with us at the Tropicana Casino in later this month. He has been a part of the Action Martial Arts Magazine family since the very beginning and he is a true Hollywood staple and martial arts leader. we look forward to making additional announcements as we lead up to the once a year event in Atlantic City, NJ”, Stated Action Martial Arts Mega Weekend founder Alan Goldberg.

Chuck Zito was born in New York, the son of a professional welterweight boxer, Zito was taught at an early age how to fight and defend himself. Following in his father’s footsteps, Zito became an amateur boxer and fought in New York Golden Gloves while working manual labor. In 1980, after assisting the bodyguards of actor Robert Conrad at a motorcycle convention, Zito began his own bodyguard agency. Named Charlie’s Angels Bodyguard Services, Zito initially provided protection for actress Lorna Luft and later was hired by her half-sister Liza Minnelli. The actress recommended Zito’s service to her plethora of celebrity acquaintances, allowing Zito to quickly develop contacts throughout Hollywood.

Parlaying his connection, Zito began a career as a stuntman working on films such as Year of the Dragon, Hudson Hawk, and The Rock. In 1996, after a meeting with producer Tom Fontana, Zito joined the HBO prison drama Oz as mobster Chucky Pancamo. Over the years Zito has alternated with stunt work and acting with credits for stunt work in films like Fifteen Minutes and acting roles in the film This Thing of Ours.

In 2003, Zito released his autobiography, Street Justice, co-authored with Joe Layden. In 2006, Zito expanded into radio with the show Chuck Zito’s View on Howard Stern’s Sirius Satellite Radio station
In 2010, Zito filed a $5 million lawsuit against the cable network FX, alleging that he had a development meeting with them in 2006, in which he pitched the idea of an outlaw motorcycle group. He alleges that FX blew him off and then stole his idea, which became the FX show Sons of Anarchy. On December 11, 2011, a court judgment was ruled against Zito. Zito appeared in Sons of Anarchy season 5, as

For more information go to http://www.chuckzito.com