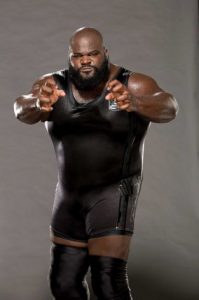 /UCW/ ATLANTIC CITY, NJ and BROOKLYN, NY – It was announced today that World Wrestling Entertainment Superstar and former Olympian Mark Henry is slated to attend the largest martial arts event of its kind in the world, The Action Martial Arts Mega Weekend at the Tropicana Casino in Atlantic City, NJ. He will be part of the weekend long festivities, speaking with fans, signing autographed pictures and he will be along side other martial arts legends and leaders. This will take place from January 27-29, 2017.

“We have been looking forward to having Mark Henry at the Tropicana for the Mega Martial Arts Weekend, so I was pleased to speak with him and get the good news. He is a class act and a definite role model for the youth, we welcome him to our family with open arms. We look forward to making additional announcements as we lead up to the once a year event in Atlantic City, NJ”, Stated Action Martial Arts Mega Weekend founder Alan Goldberg.

Mark Henry is an American powerlifter, Olympic weightlifter, strongman, and professional wrestler who is currently signed to WWE on the Raw brand. He was a two-time Olympian in 1992 and 1996 and a gold, silver, and bronze medalist at the Pan American Games in 1995. As a powerlifter, he was WDFPF World Champion (1995) and a two-time U.S. National Champion (1995 and 1997) as well as an all-time raw world record holder in the squat and deadlift. Currently, he still holds the WDFPF world records in the squat, deadlift and total and the USAPL American record in the deadlift since 1995. He is credited for the biggest raw squat and raw powerlifting total ever performed by a drug tested athlete, regardless of weight class, as well as the greatest raw deadlift by an American citizen.

Since joining the World Wrestling Federation (now WWE) in 1996, he has become a one-time WWF European Champion and a two-time world champion, having held the ECW Championship in 2008, and WWE’s World Heavyweight Championship in 2011.

For more information go to http://www.wwe.com/superstars/mark-henry

just got off the Phone , Big Mark Henry WWE Champion will be Joining us This year for sure.