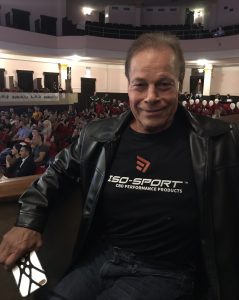 /UCW/ VANCOUVER, BC, CANADA – Isodiol International Inc. (CSE: ISOL) (OTCQB: ISOLF) (FSE: LB6A.F) (the “Company” or “Isodiol”), is pleased to announce that actor, author, former champion bodybuilder and World’s Strongest Man competitor, Franco Columbu, has joined the management team at Iso-­‐Sport. Mr. Columbu will focus on the business development of Iso-­‐Sport and raise further awareness of the Company’s health and wellness CBD products for athletes around the world.

Columbu has won every important title in bodybuilding and power lifting. He is a two-­‐time Mr. Olympia − the most prestigious and lucrative title in bodybuilding − and has been Mr. Universe and Mr. World, among others. Even more amazing is the fact that he won his second Mr. Olympia at the age of 40, a mere five years after he had completely dislocated his knee in competition.

Some of his power lifting world records are even more legendary: Bench Press − 525 lbs., Squat − 655 lbs., and Dead Lift − 750 lbs. In April 1979, Franco even made it into the Guinness Book of World Records for the highest lung power when he was able to blow up a hot water bottle until it burst in just 55 seconds using only sheer lung power.

Franco Columbu’s film work includes producing and starring in “Beretta’s Island,” “Doublecross on Costa’s Island,” and “Ancient Warriors.” He also produced and directed “Sardinia, The Greatest Isle of the Sea,” an award-­‐winning documentary about his homeland. Columbu appeared in the documentary, “Pumping Iron,” and played supporting roles in the blockbuster movies, “Conan the Barbarian” and “The Terminator.” On television, he was technical advisor for and appeared in the CBS-­‐TV movie “Getting Physical.” He has also been featured in several national TV and print commercials as well as numerous guest appearances and television shows.

Columbu graduated from Chiropractic College in 1977 and has been the recipient of several honors and awards throughout the years including:

Currently, Mr. Columbu serves as a consultant and advisor on many boards and organizations including the Arnold Sports Festival Event Committee, where he works with elite professional and amateur athletes alike.

With the recent addition of David Hawk and now Franco Columbu, Iso-­‐Sport believes it has firmly positioned itself as a true leader and a driving force. “We’re so excited to have Franco Columbu join the Iso-­‐Sport management team,” said Isodiol CEO, Marcos Agramont. “Franco’s career as a world-­‐renowned bodybuilder, champion weightlifter, high-­‐performance athlete, and chiropractor adds an unprecedented level of experience and credibility to the Iso-­‐Sport brand as we continue our mission of bringing the finest CBD products to athletes around the world.”

Along with the announcement of Franco Columbu joining the management team, a recent partnership was forged that will bring Iso-­‐Sport products to Powerhouse Gyms worldwide. The agreement marks one of the first times that CBD-­‐based products are made available through a global fitness center chain. Additionally, the company has entered a partnership with training giant, ALTIS, to develop innovative CBD sports products for elite athletes while investigating the impact of these products on overall health and performance. That partnership is called the Iso-­‐Sport Living Lab.

Read more about Franco Columbu and his partnership with Iso-‐Sport: https://iso-­‐sport.com/franco-­columbu

Isodiol International Inc. is focused on the development of CBD-­‐based pharmaceuticals and CBD consumer products. With a dedicated passion for the industry it serves, the company’s mission is to create a cultural movement by building awareness and social acceptance, ultimately empowering people to live better lives – globally. This mission is enacted through unique divisions and subsidiaries that help deliver the powerful benefits of CBD to people around the world.

Since its inception, Isodiol® has directed its efforts toward advancing CBD research, education, development, and manufacturing. The company has made tremendous strides in the CBD space through clinical research and forging valuable partnerships that have allowed the manufacturing of goods in accordance with strict industry practices and standards.

BSPG Laboratories™, a subsidiary of Isodiol®, was recently registered with the United Kingdom’s Medicines and Healthcare products Regulatory Agency (MHRA) for producing CBD as an active pharmaceutical ingredient (API) for use in pharmaceutical applications for humans and animals.

Isodiol® is a publicly-­‐traded entity with corporate offices based in Vancouver, Canada, and additional operations in the United States, South America, and the U.K. For more information about Isodiol®, please visit https://isodiol.com or call (855) 979-­‐6751.

ON BEHALF OF THE BOARD
Marcos Agramont, CEO & Director

The CSE has not reviewed, approved or disapproved the content of this press release.