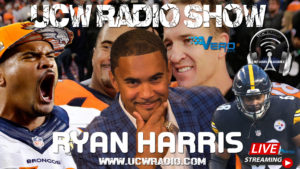 Super Bowl Champion, author and financial literacy advocate, Ryan Harris, joins host Louis Velazquez on the UCW Radio Show to talk about everything from sports to finance and his new books.

Ryan Harris is a former American football offensive tackle of the National Football League. He was drafted by the Denver Broncos in the third round of the 2007 NFL Draft and also played for the Philadelphia Eagles, Houston Texans, Kansas City Chiefs, and Pittsburgh Steelers