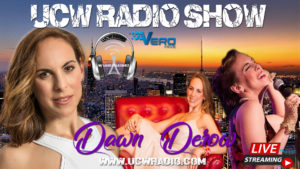 On this episode of the UCW Radio Show we are talking with Dawn Derow, a very talented singer who focuses on cabaret style music but is diverse and can cross over into rock, jazz and opera. She is also a fitness trainer, actress and writer. Learn more about her on the show.
www.ucwradio.com

A New Yorker by way of Cape Cod, Massachusetts, Dawn grew up in Eastham, MA and began pursuing her performing career in her childhood. She graduated from the Boston Conservatory with a Bachelor’s in Music: Vocal Performance & Opera Emphasis, achieving the second highest vocal score in her class. After graduation, Dawn performed in operas and musicals around the world, as well as a guest entertainer aboard international cruise ships, displaying an uncanny ability to transition from singing a Puccini aria to a jazzy torch song.